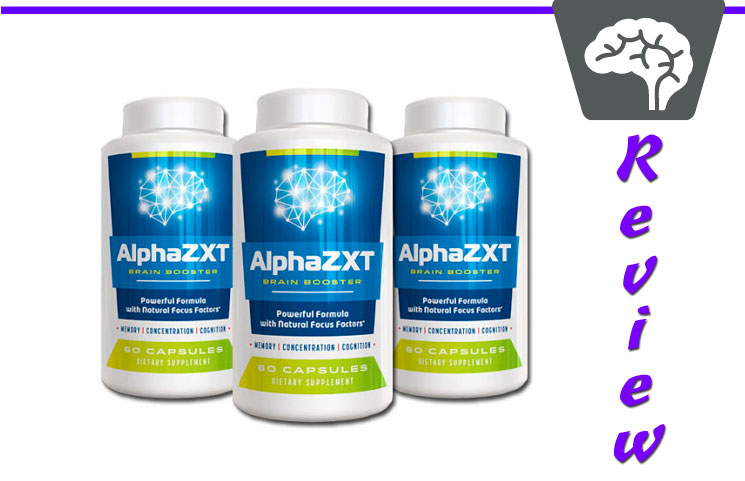 What is Alpha ZXT Brain Booster?

Alpha ZXT Brain Booster is a new nootropic supplement that calls itself the “#1 Rated All Natural Smart Pill.”

It promises to deliver three key benefits directly to your brain:

As the body ages, so too does the mind. This leads to memory loss, concentration problems, lack of focus, lack of motivation, and low energy levels.

According to the sales copy on the Alpha ZXT Brain Booster official website, “we lose up to 60% of our mental focus from age 25 to age 70”.

The Alpha ZXT website has no information about where the supplement was created, where it was manufactured, or where the company is based. It only provides one customer service number, which is 1 (855) 962-7747.

Alpha ZXT claims to use an all-natural formula made with 100% pure phosphatidylserine complex. This complex has been shown to lead to nootropic effects and has proven particularly beneficial on those with Alzheimer’s and dementia. According to the manufacturer of Alpha ZXT, their formula is backed by real scientific research.

Phosphatidylserine is purported to boost the memory of men and women of all ages.

Unfortunately, the manufacturer doesn’t really explain how the supplement works – it just claims it boosts concentration, focus, and mental energy without exactly saying which brain mechanisms it uses to enhance that focus.

The compound itself is an amino acid derivative. It’s fat soluble and already found in high levels in the brain. As we age, the body produces less and less of it.

There’s enough scientific research surrounding phosphatidylserine that the FDA has actually legalized its use. In 2002, a doctor launched a petition to the FDA urging its legalization. The FDA responded with the following:

“The petition provided evidence that phosphatidylserine is safe and lawful. This evidence is derived from human studies, and the petition also cites the absence of reports of adverse reactions in the published literature.”

One landmark study on phosphatidylserine was published in the November 2010 edition of the Journal of Clinical Biochemistry and Nutrition. Researchers performed a double-blind, placebo-controlled study which demonstrated the powerful effects of phosphatidylserine on human subjects.

Here’s how the researchers concluded their study:

“The oral administration of Soy-PS for 6 months improved memory function, especially delayed recall, in the elderly with memory complaints. This effect was equally observed at both low dose (100 mg/day) and high dose (300 mg/day). The safety of Soy-PS was also confirmed. Since delayed recall is thought to be one of the cognitive functions impaired at the earliest stage of dementia, Soy-PS may serve as a desirable supplement for preventing dementia development in people with memory complaints.”

Now, the only problem with all of this is that Alpha ZXT Brain Booster doesn’t say exactly how much phosphatidylserine is included in each serving. Normally, drug manufacturers want to advertise how much of a certain compound can be found in their supplement. Apparently, that’s not the case with Alpha ZXT.

Does Alpha ZXT contain 100mg per serving (a low dose)? Or does it contain 300mg or more (high dose)? It could even contain less than 100mg per serving, in which case the effects will not be nearly as noticeable. We just don’t know – which is suspicious for a company that expects you to put their pills into your body. Buying Alpha ZXT Brain Booster is relatively straightforward. After visiting the official Alpha ZXT website, you can enter your contact information into the online form along the side. Then, you’ll see the following bottle offers:

The manufacturer claims that it offers is a 60 day money back guarantee. If you’re unsatisfied with Alpha ZXT for any reason, then you can get a full refund on your purchase within 60 days.

At the time we tried to purchase, we were also selected as one of 50 customers to receive a 40% discount, so prices were then:

It does currently say they have a High sellout risk. So I guess you would just need to check and see. Hopefully everyone really qualifies for the 40% off discount as well. While they do not offer a “Free Trial,” that is probably for the best. As that usually gets customers into trouble.

Is Alpha ZXT Brain Booster Right For You?

Alpha ZXT claims that its primary ingredient is phosphatidylserine. That’s good, because phosphatidylserine is an FDA-approved drug that has proven benefits on those with Alzheimer’s, dementia, and other degenerative neurological conditions.

Unfortunately, Alpha ZXT doesn’t list how much of that ingredient is included in each serving. It also doesn’t list any other ingredients. It just claims to be a 100% pure formula.

For all of these reasons, you may want to wait for more Alpha ZXT Brain Booster reviews before purchasing Alpha ZXT to boost your cognitive power or help out an aging relative. If you are looking for more information on Nootropics, please head over to our Nootropic Smart Drug Guide so that you can learn more about how these work and what may be best suited for you. Or if you are wanting to check them out yourselves, you can see the official Alpha ZXT website yourself and see if it is right for you.