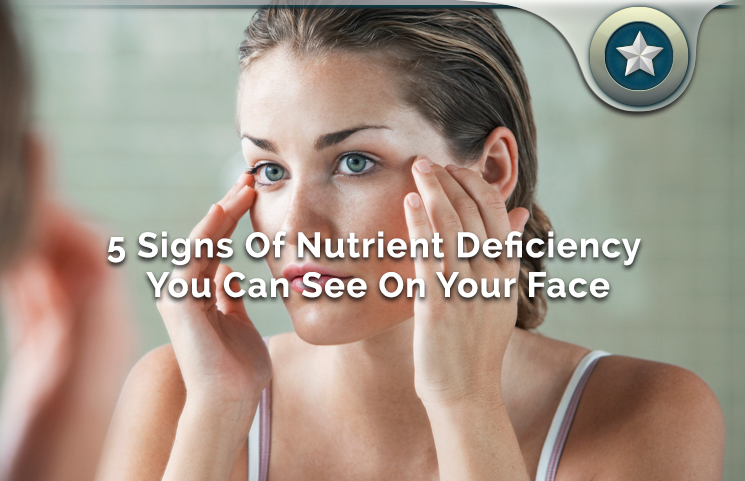 Vitamin deficiencies are known to sometimes result in several different health problems and can even ultimately in death. This is because when the human body lacks a certain nutrient, damage is experienced in its entire structure, and there is some imbalance in all of its functions.

The deficiency of Vitamin A has been responsible for the deaths of more than 8 million children in the past twelve years. In fact, more than 1,000,000,000 people have been diagnosed a Vitamin D deficiency, and this issue has even been considered to be an epidemic. The imbalance that the body experiences due to nutrient deficiency is often exhibited externally, most notably with several different types of skin issues. There are some 5 common signs that are known to indicate that the human body is experiencing deficiencies in vitamins and minerals. Some of the notable ones include the following:

A deficiency in Vitamin C is usually indicated by bleeding gums in individuals. Other physical signs on the face may include swollen joints and nose bleeds. Vitamin C is among the most essential nutrients required by the human body.

Naturally, the human body is not meant to produce Vitamin C, nor can it store it, and this is why it is important for it to be consumed in dietary sources. Some of the foods that are rich in Vitamin C and therefore should be consumed are strawberries, mango, watermelon, cantaloupe, kiwi fruit, citrus fruits, rose hips, red peppers, broccoli, and guava fruit.

Victims of this deficiency usually have a strong urge of eating dirt, clay, or ice, which is also known as pica. Foods that are enriched with iron are dark green leafy vegetables, dark chocolate, lentils, dried beans, fish, red meat, raisins, spinach, and spirulina. These should be incorporated into the diet on a daily basis for consumption. This particular nutrient deficiency symptom is common in women as compared to men.

Extremely pale skin is a common sign that the body is lacking Vitamin B12. However, this deficiency may also be exhibited through fatigue, memory problems, and certain skin conditions.

Foods of animal origin are known to be high in Vitamin B12, but it can also be consumed in the various Vitamin B12 supplements that are available on the market today. The consumption of pastured eggs, cruelty-free goat’s cheese, raw rennet-free cheeses, and Vitamin B12 supplements are all highly recommended to avoid a Vitamin B12 deficiency. The rule of thumb is to eat organic poultry, wild-caught fish, and grass-fed meats.

Puffy eyes can indicate more than just insufficient sleep. This is because it can also be a facial sign of reduced iodine levels. The intake of table salt should strictly be avoided or greatly limited because the human body does not easily utilize it.

Iodine has the significant role of pushing out endocrine disruptors like chlorine, fluorine, and bromine. It helps in enhancing the thyroid function, thus decreasing the puffiness effect. This deficiency can be avoided by the consumption of washed vegetables like kelp, pastured eggs, lima beans, navy beans, and kefir.

Dry hair that has developed brittleness or even a scalp with excessive quantities of dandruff is a sign of a Vitamin B7 or Biotin deficiency. This condition is mostly caused by the excessive use of antibiotics that result in the destruction of intestinal bacteria, which their role is to synthesize biotin.

This deficiency can be avoided or cured by the consumption of mushrooms, avocados, legumes, sunflower seeds, cauliflower, egg yolks, walnuts, green peas, and nuts in general.

There are also some other signs that are associated with nutrient deficiency but are rare, and they include the following:

A smooth tongue can indicate a symptom of a Vitamin B12 deficiency. Including lean meat in your diet may reduce or correct this condition.

Hair loss can be a sign of Vitamin B7 (Biotin) deficiency. The human body requires Biotin for the metabolism of amino acids, carbohydrates, and fats. However, Biotin is mostly known for its role in strengthening the nails and hair. Free-range eggs are the ideal source of Biotin. The eggs should be eaten raw for optimum nutrient consumption.

This is normally a sign of deficiency in Vitamin D, Vitamin A and Omega-3s. This deficiency can be controlled by consuming anchovies and sardines that are rich in Omega-3s. Vitamin D can be obtained from being in the sunshine, and Vitamin A can be derived from eating red bell peppers, sweet potatoes, and leafy green vegetables.

This is common sign of deficiency in B vitamins (B12, riboflavin, niacin), zinc, and iron. This deficiency can be prevented by the consumption of tahini, Swiss chard, clams, wild-caught Alaskan salmon, as well as organic free-range poultry and eggs.

There are certain factors that significantly influence the nutrient levels in the foods that we consume, and these include:

The above reasons are why even produce that is considered to be healthy may not be rich in nutrients as you would typically expect.

Regardless of whether a person eats well or not, there are some factors that can affect the human body’s ability to absorb nutrients consumed by eating foods. The factors comprise of the following:

The different blood tests, which are normally done to diagnose nutrient deficiencies, tend to be expensive. There is a much easier, efficient, and more affordable way of discovering nutrient deficiency, and it all lies in the face as described above by taking care to eat well and paying attention to their body.

The only requirement is for a person to pay close attention to the signs of nutrient deficiencies, as they can be quite elusive.